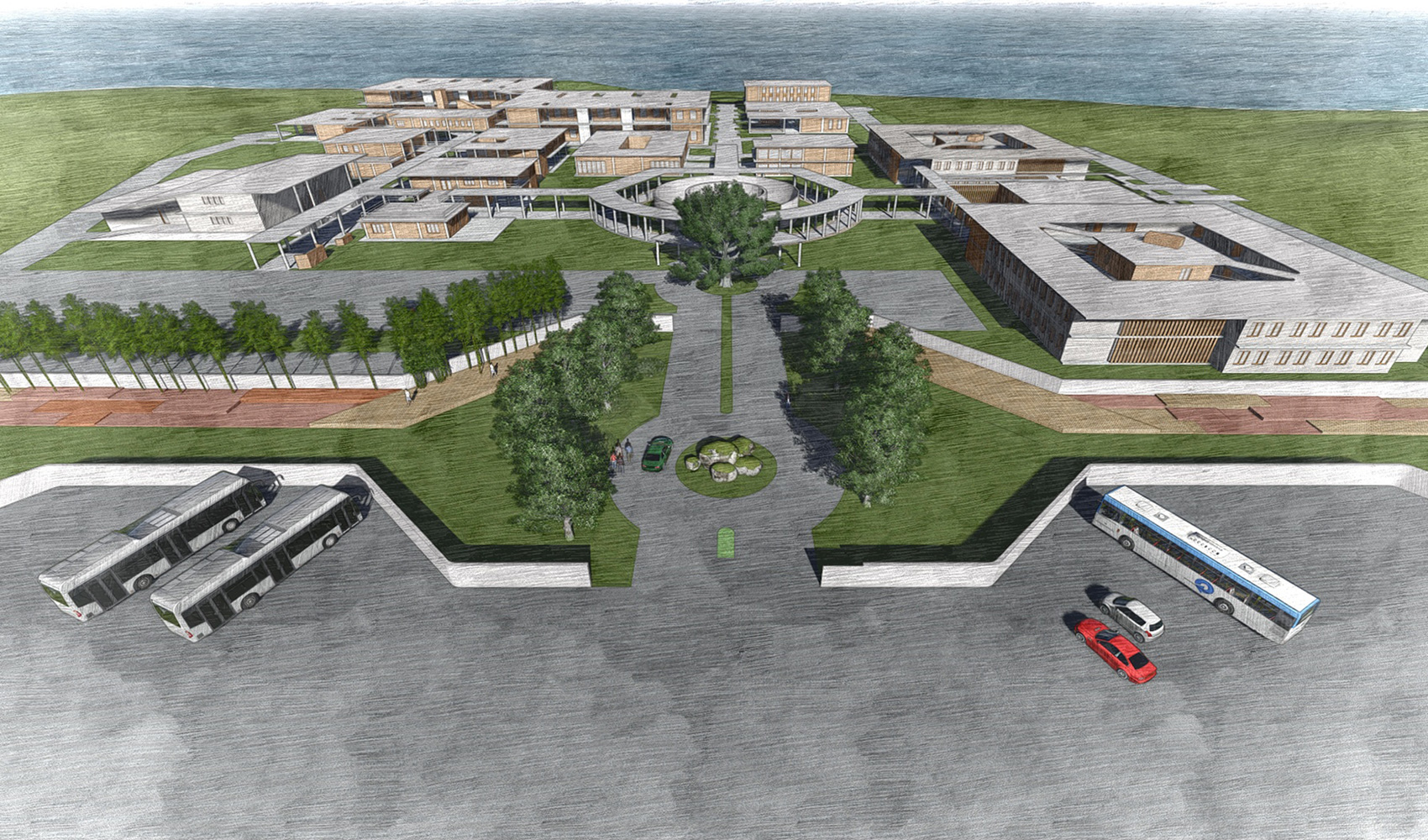 Apparently, in the Indian sub-continent, design cultures have been changing rapidly in the last couple of years. Buildings are being treated as mere objects and commodities which then lack proper environment for learning. Such a culture of construction is affecting the institutions at large. They are not becoming catalysts of change. We need to rethink about the way we build these learning environments.
Since architects play a major part in this process of construction, the way they are being taught needs to be crucially thought of. The environment where the student learns about these design principles and lessons on architecture should be critically addressed.
Rethinking the spatial configuration of an architecture institute for young architects and arriving at a design concept/ solution which will help create better learning environments for students.
A school of Architecture is a platform which serves as a learning environment for students pursuing their careers in architecture. A school of architecture runs 20 hours out of the 24 hours as the profession is ever demanding for time. Spaces within this institute promote architecture and that can be identified by the design culture brought about by relationships between the students and their surroundings.
Spaces that encourage a culture of ‘thinking, questioning and experimenting’ that would help evolve architectural education.
“Schools began with a man under a tree who did not know he was a teacher, sharing his realization with a few others who did not know they were students”
Can we create a situation like that where the teacher and student share knowledge while architecture is the catalyst for it? Transparency is a good word. It is about clarity, but without letting down the guard. We want to look out and let others in but we still want a degree of control. It is also about flexibility and detail. We cannot work with an Architectural transparency without due care for the way we deliver it. This month’s materials deliver detail, flexibility and transparency. They will also help push the creative boundaries.

Transparency at Edge of the Institute
Can the edge be softened or blurred?
A platform to publicise and showcase architecture for the profession it is. Interaction between students and the public (Parents, Budding architects, Architects, general curious and inquisitive public)

Transparency to a hypothetical site
Being true to the site that is facing the panoramic view of the beach and the sea. Maximising the views of the sea by having all the spaces facing it.

Transparency in the Studios
Where visual transparency draws a boundary, the exchange of knowledge within the classrooms make for a transparent platform. 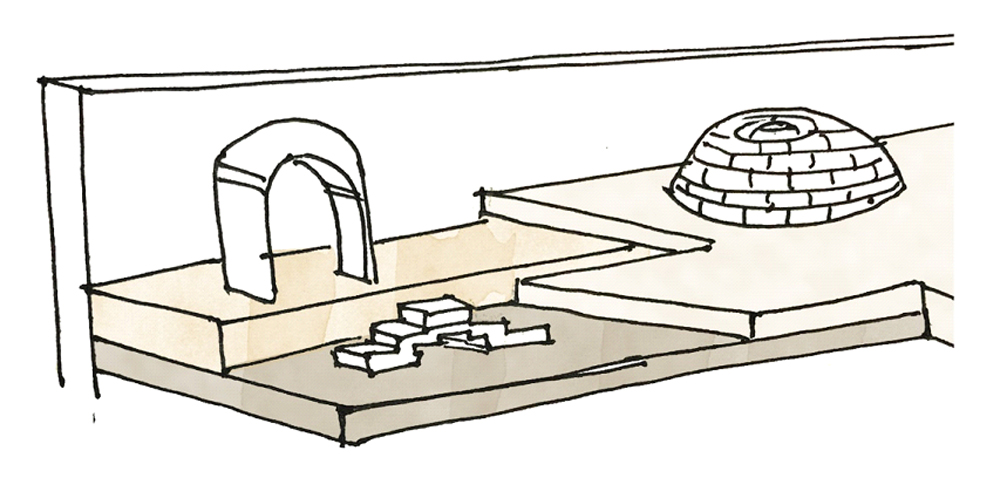 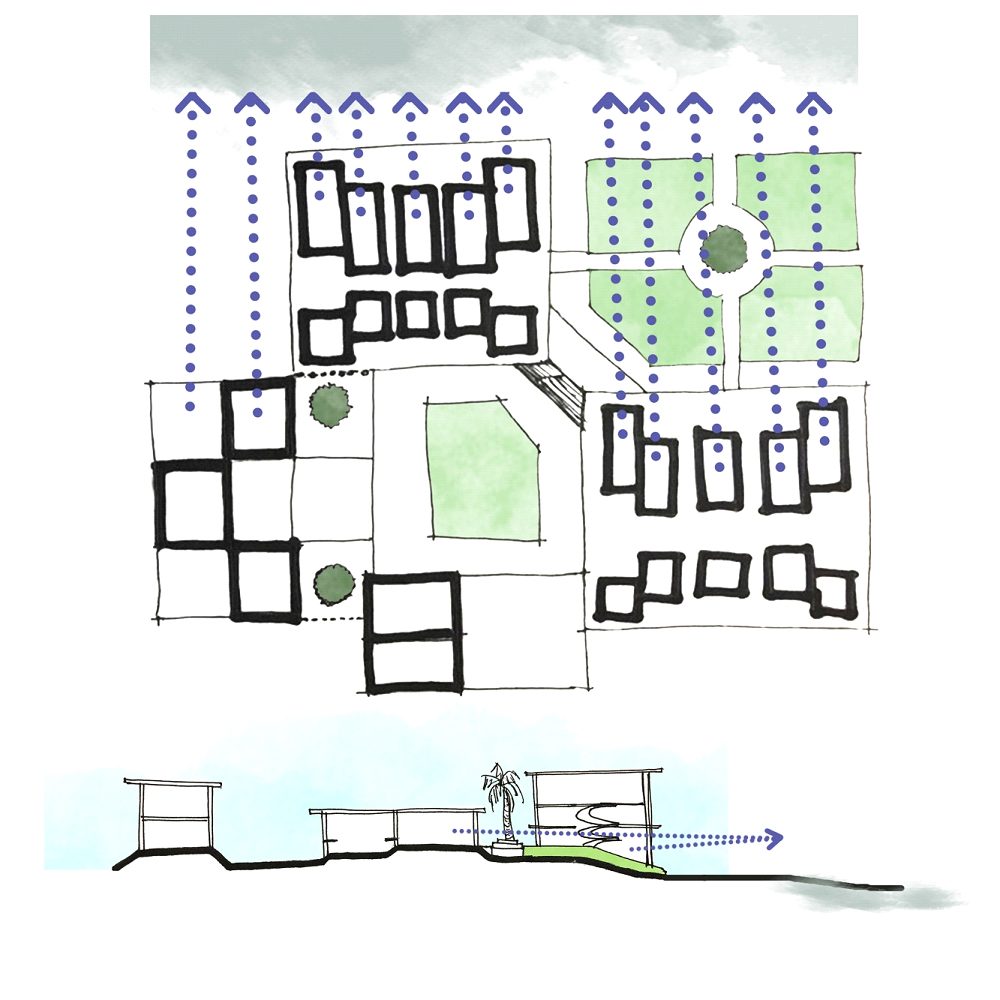 Flexibility is the potential for spaces to be used in a variety of ways without altering the building fabric. Adaptability is the potential for the fabric of a workshop to be modified with relative ease to accommodate change.
Flexibility of the Laboratories
Following the module of a lecture room layout, both laboratories incorporate the essence of flexibility; material testing lab and climatology lab can be planned in 8 x 8 m layouts.
Flexibility within the Studios
Arrangement of the studios can be made possible with flexible furniture that is readily adaptable to changes and which also encourage a learning environment. 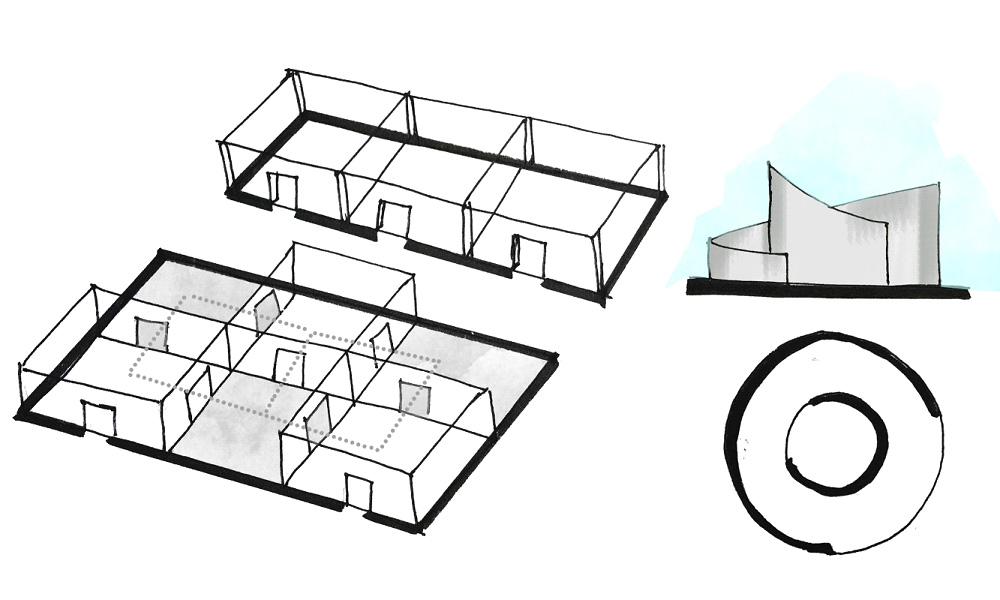 Left to Right: Layout of the workshop and an Exhibit Display (Hall of Fame)
‘PLTATFORMS’
Platforms serve as a multifunctional space that allows interaction between every kind of user. The workshop arrangement is transformed with one cube pushed out so that all three open up to platforms where students can bring out their models and have abundant space to do their work

‘GREEN RAMPS’
This feature also acts as a multi-functional space which can be seen in the incubation centre. This can be accessed by any user in the campus. They can sit, read a book, work on their laptops and collaborate! 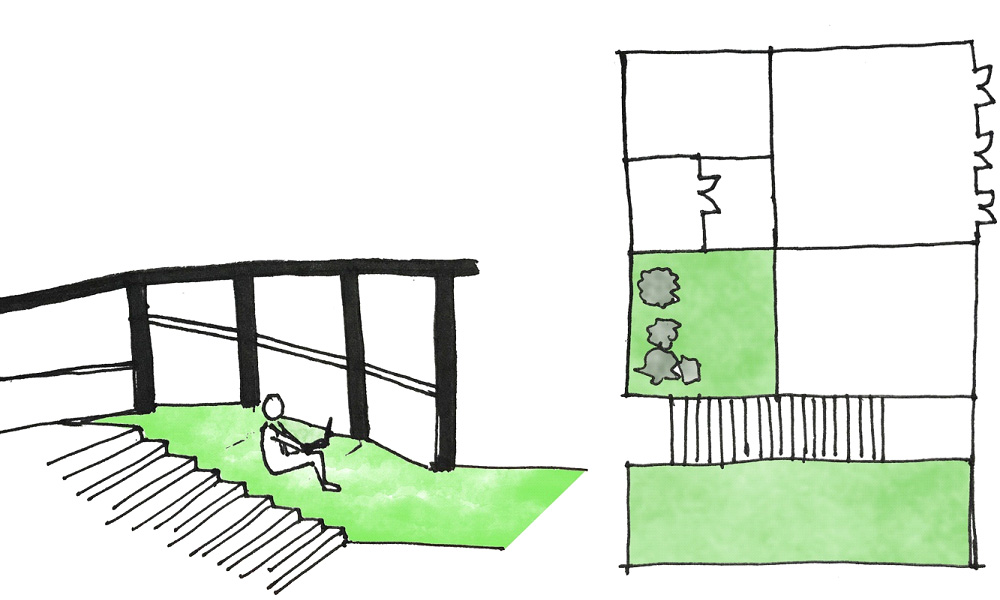 The spaces are planned in such a way that original creativity is produced at every nook and corner. Th multifunctional spaces that the School offers is abundant and promotes gathering and interaction.
Planning the layout of the studios in a way where interaction happens between the students of all 4 years. 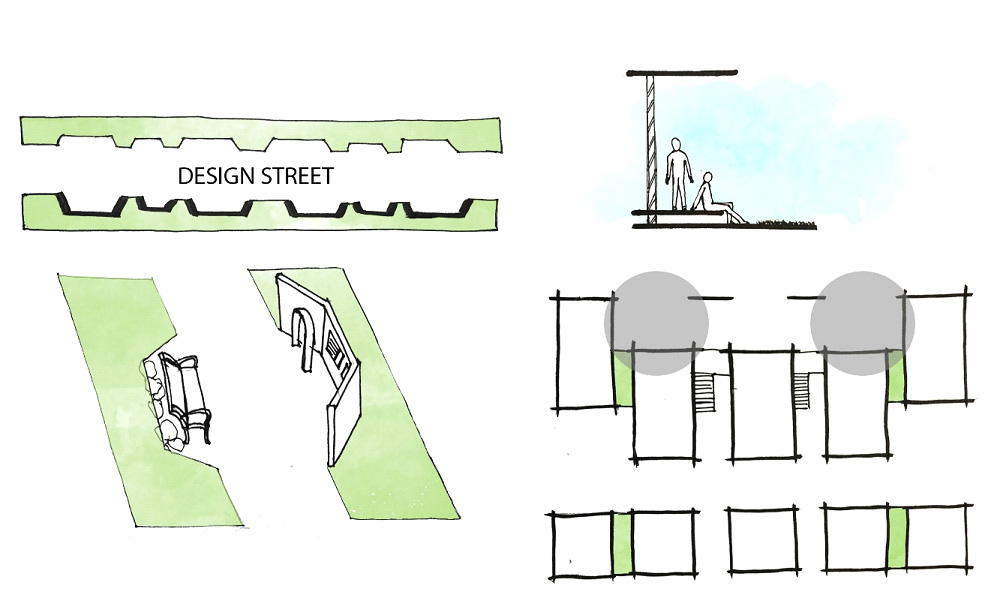 Left to Right: ‘DESIGN STREET’
Nooks and corners are provided as mini stages where students can display their work, decorate each stage and have seminars/ crits.
The studios are staggered and arranged such that they open out into platforms. A transition from Assemblage to Disassemblage. 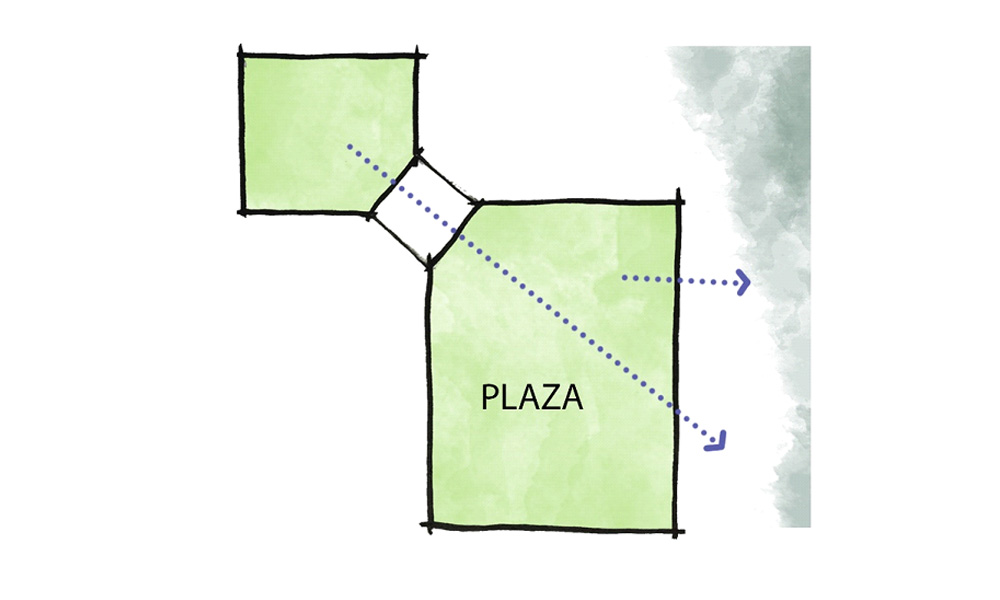 The academic block has a courtyard and opens out into a larger plaza that offers views to the sea. Providing a flexible platform that serves as an exhibit space, a platform for conversation or a space for collaboration. 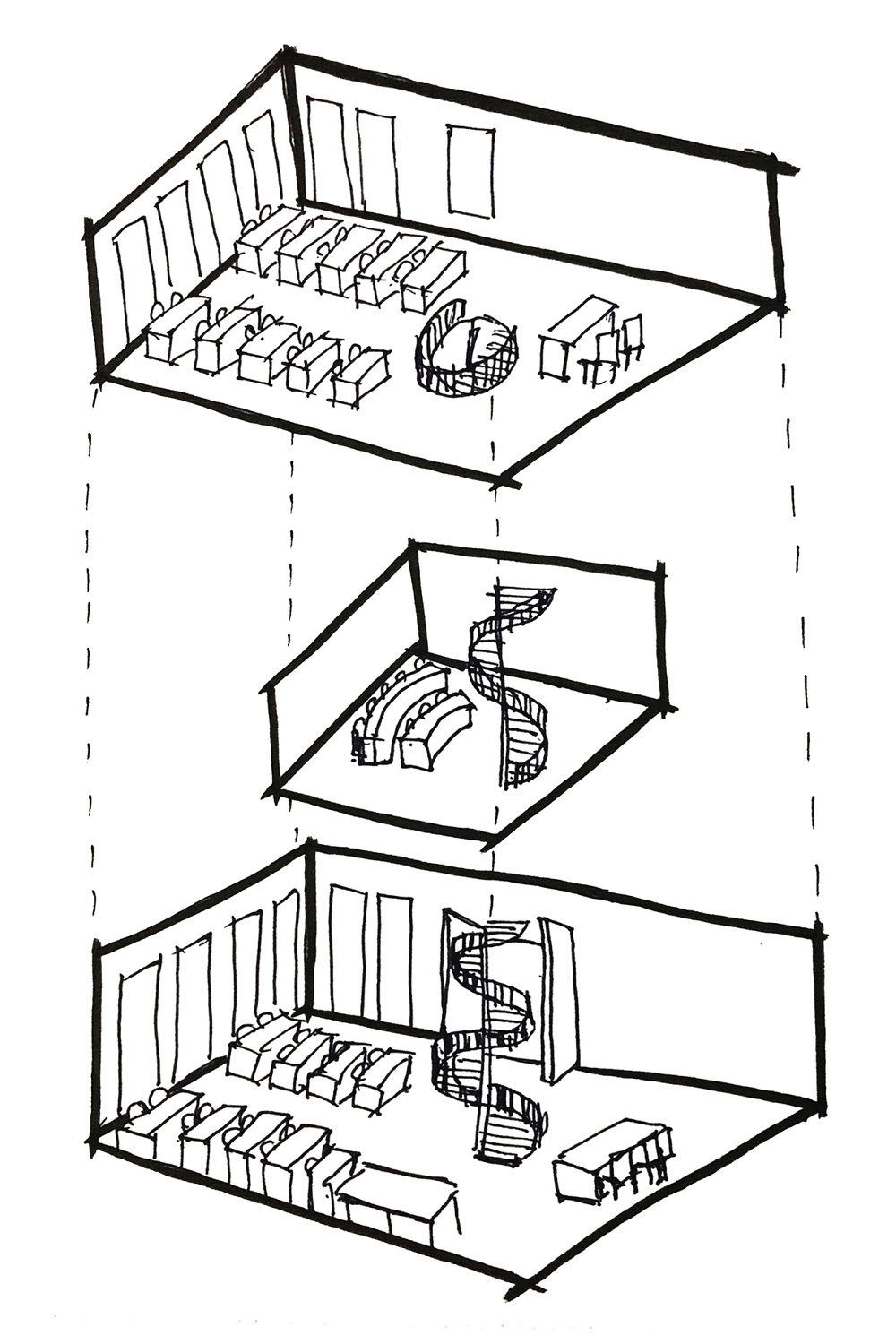 The studios have a mezzanine collaboration platform that allows vertical schooling between students. A fifth-year student can always learn/ pick up design tactics from a first-year student.