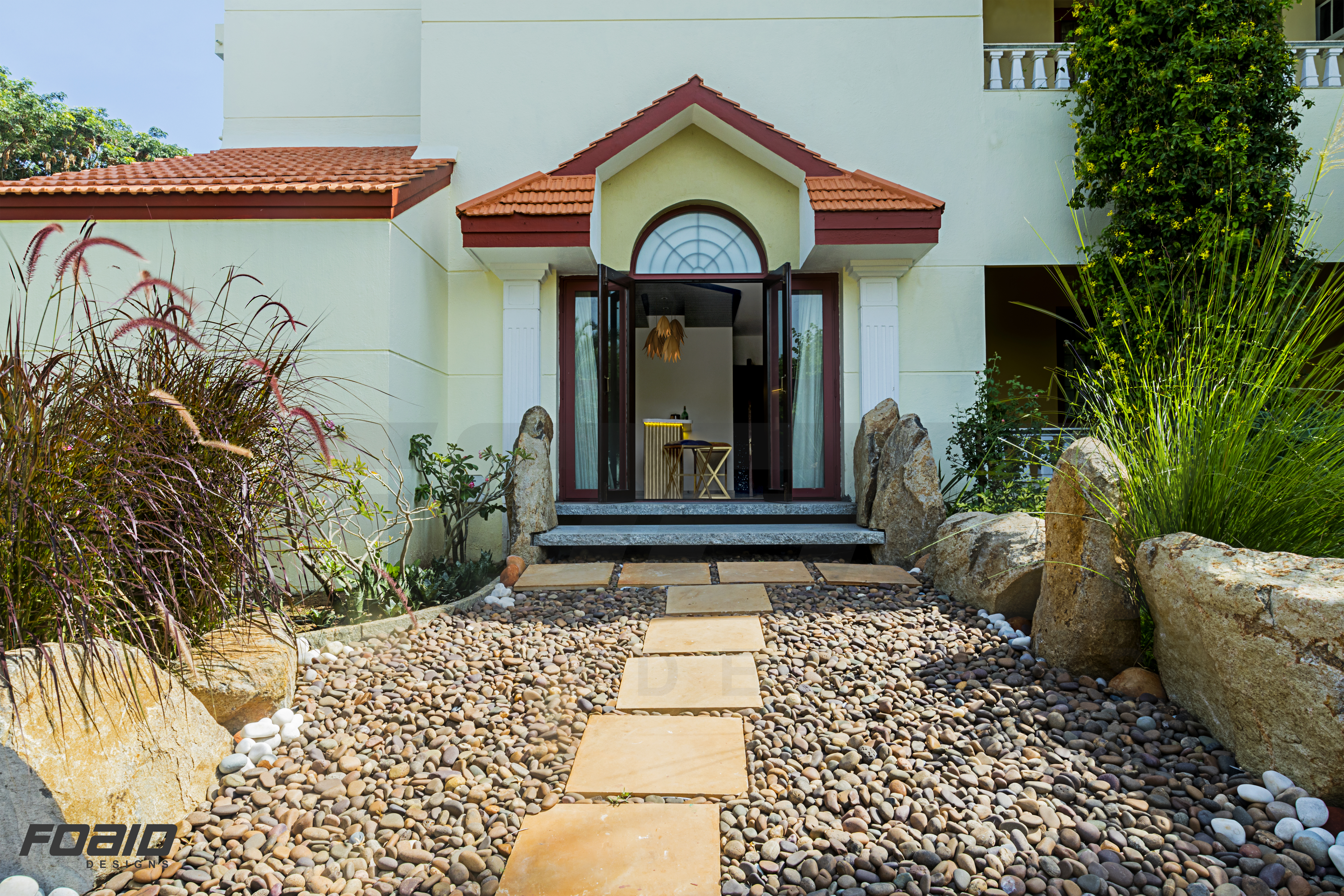 One of the oldest and largest residences on the East coast road, the site is divided into 4 zones. Initially made for 4 families and now divided into singular zones with specific uses to serve a family of 6. When the client visited our office, they wanted to renovate their zone 3 making it a complete recreational zone with uses like a bar, spa, study and library. The idea was to now allow the users of the home to comfortably entertain themselves within their premises. Spaces to gather and host parties while enjoy a drink or a silent book read without stepping out.

The bar has a double entrance, one from inside of the house and second which open out into the lawn during larger gatherings. Initially two rooms, now combined together to form a large bar room, with a sit out, pantry and a powder toilet. When you enter into the home one gets a feeling of pure grandeur, which in turn formed the basis of the bar. Grand and luxurious with highlights of gold. Craftsmanship which represents modernism yet intricate. It had to represent a cozy home bar and not a space that stands out from the house. The paneling was developed in a way that light and shadow play is reflected without artificial lights too. The bar counter had to be a highlight of the room but also a conversation starter in its own. We used color pops in the room furnishings to create a break from the luxe wall and furniture finishes.

The spa was converted from a small bar space, where the store and toilet were converted into a large bathroom with a steam room. The idea was simply to retain most of what existed but to add in a touch of Zen and nature essence into the room. As the room did not have any openings, we decided to incorporate nature in the wall coverings, while using stone finishes for the wall, giving it a raw yet spa like feel.

The study or games room, was our favorites, where we wanted to use pastel colors and staggered panels with inclined shelf, which changes the viewing dimensions of the viewer. The room as such was at angle which allowed us to use as a base for the design itself. Walnut with white being our favorite, also such with which pastel colors just blend so well. The table can be used for study, office table or just to doodle over. The family enjoys playing puzzles here together, while having their evening tea and chat sessions.

We love it when the client gives us a blank canvas and tells us paint as you like. It was a pleasure developing this zone of the house which now is one of their and our favorites.